Our James Hedgcock collected his first gold medal as an Elite rider representing Ontario in the Team Sprint. 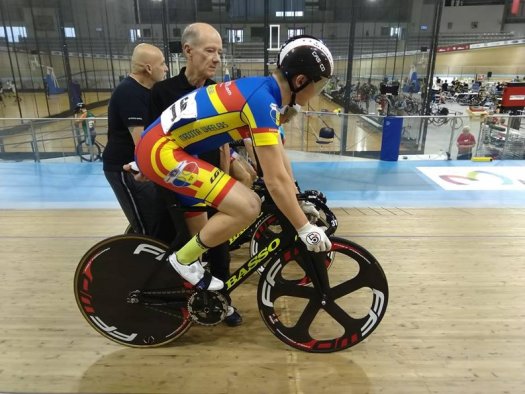 James Hedgcock was second in the BMX National Championships in Etobicoke this afternoon. James won all three of his heats in making the final and was second in the championship. James has been selected to race for Canada at the upcoming Junior Worlds in Belgium.

My photos are too large for an email, to view please click on link below – 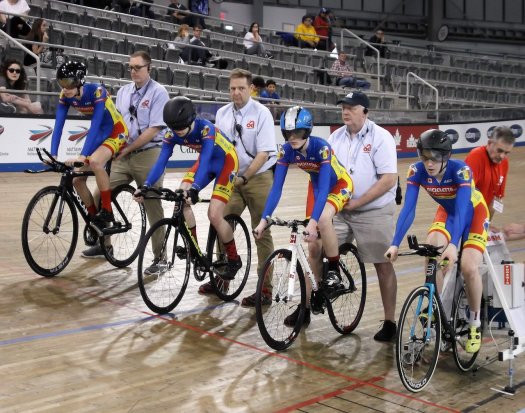 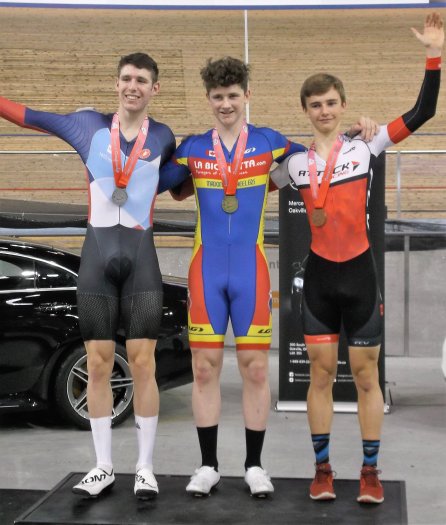 Together with the first 2 days Madonna Wheelers netted 2 Gold, 3 Silver and 3 Bronze, the small team with a huge heart!

Saturday the Midweek club with a little help from Madonna Wheelers dominated the Match Sprint. 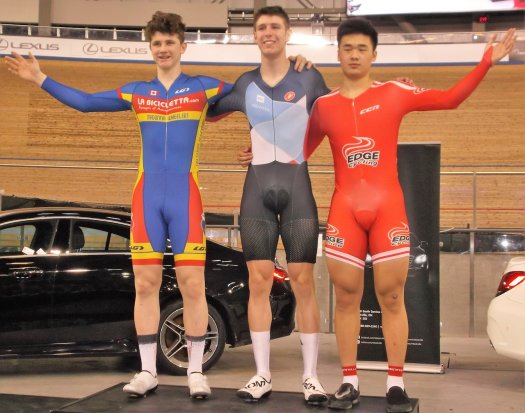 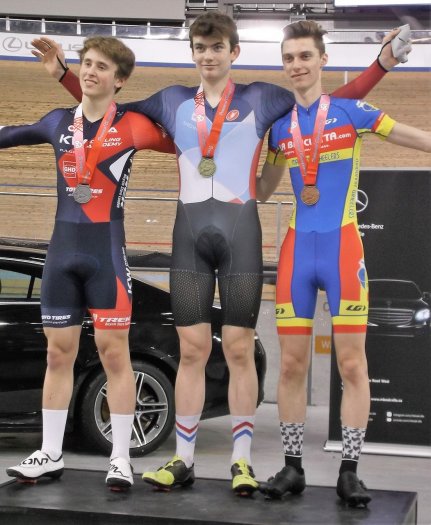 At the 2019 Ontario Track provincial Championships Day 1 Madonna Wheelers came away with a gold and a silver medal in the Junior Men and U17 Men Team Sprint events today.

Congratulations to our small team with a big heart: 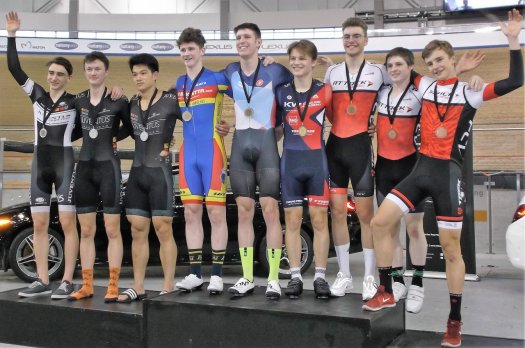 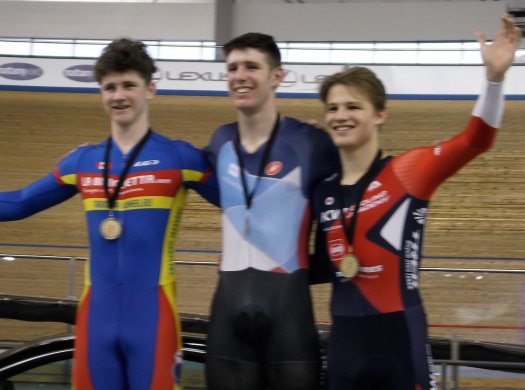 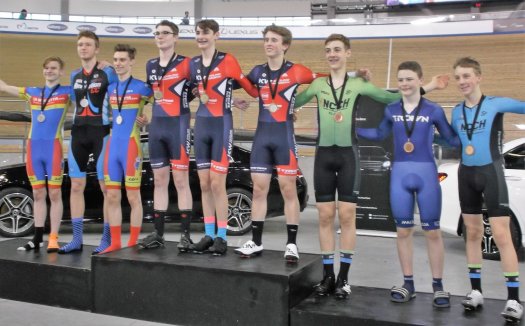 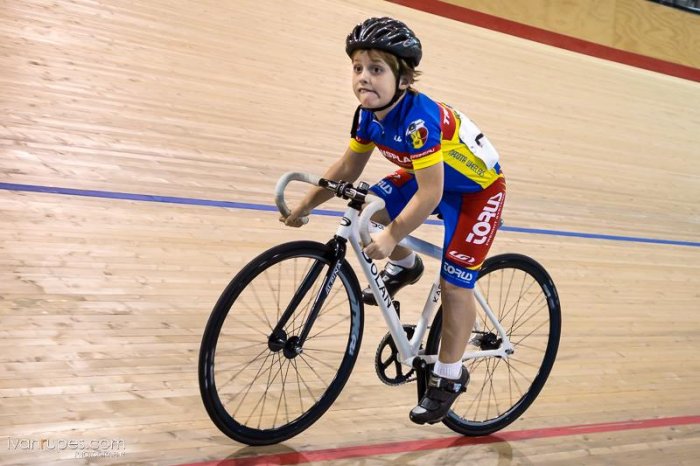 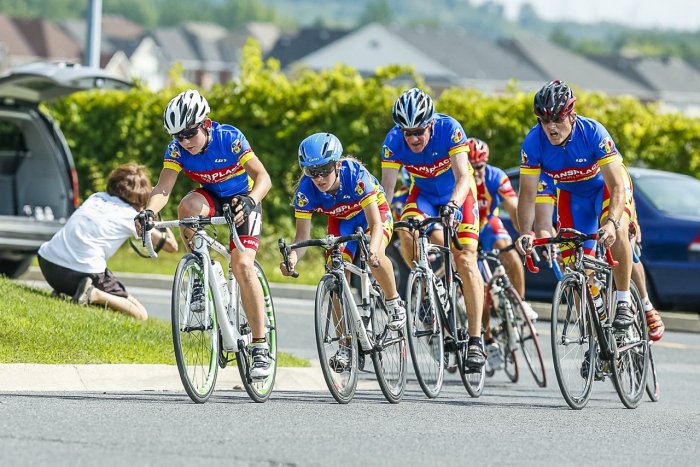 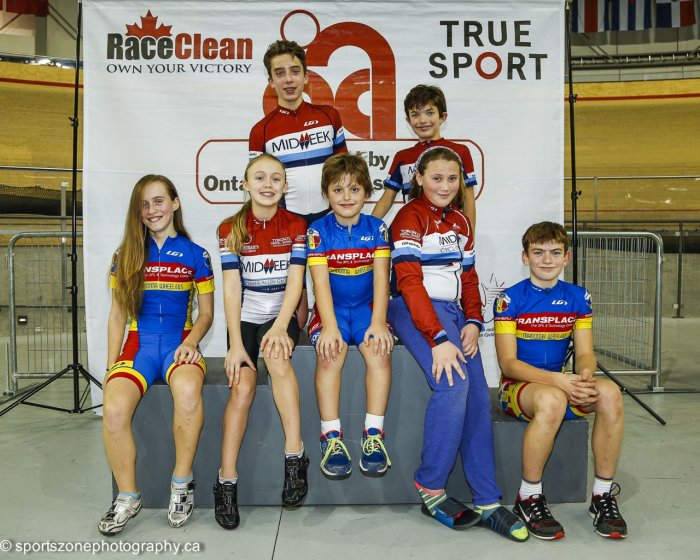 At this time of year the Ontario Cycling Association presents the seasons awards.

Third place plaque for boys U11. 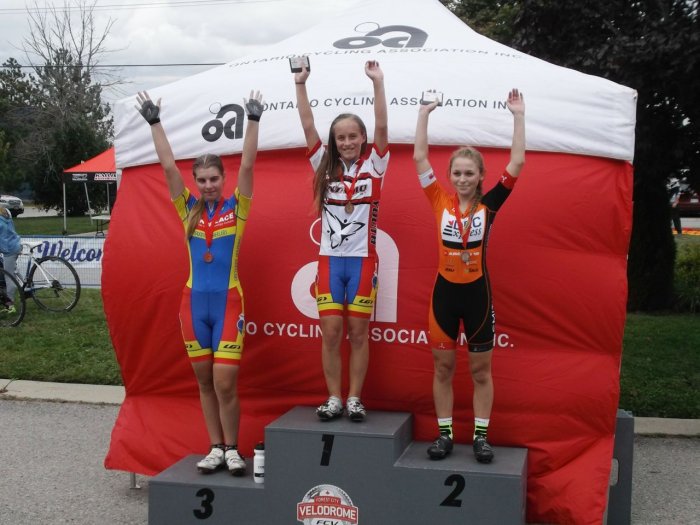 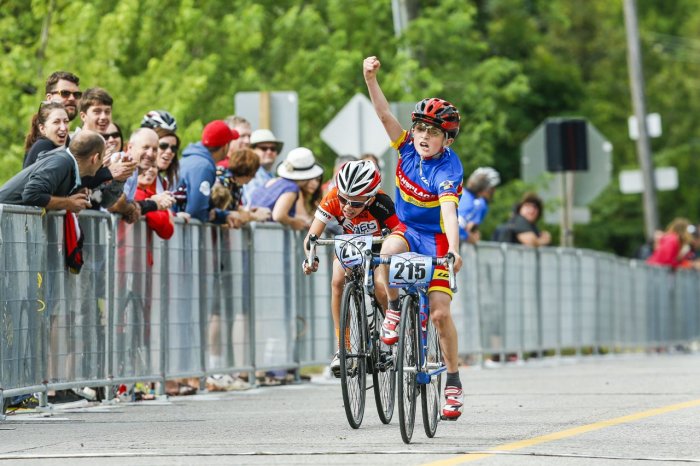 Congratulations to the Champions of the 2015 Madonna Wheelers Cycling Club Championships: 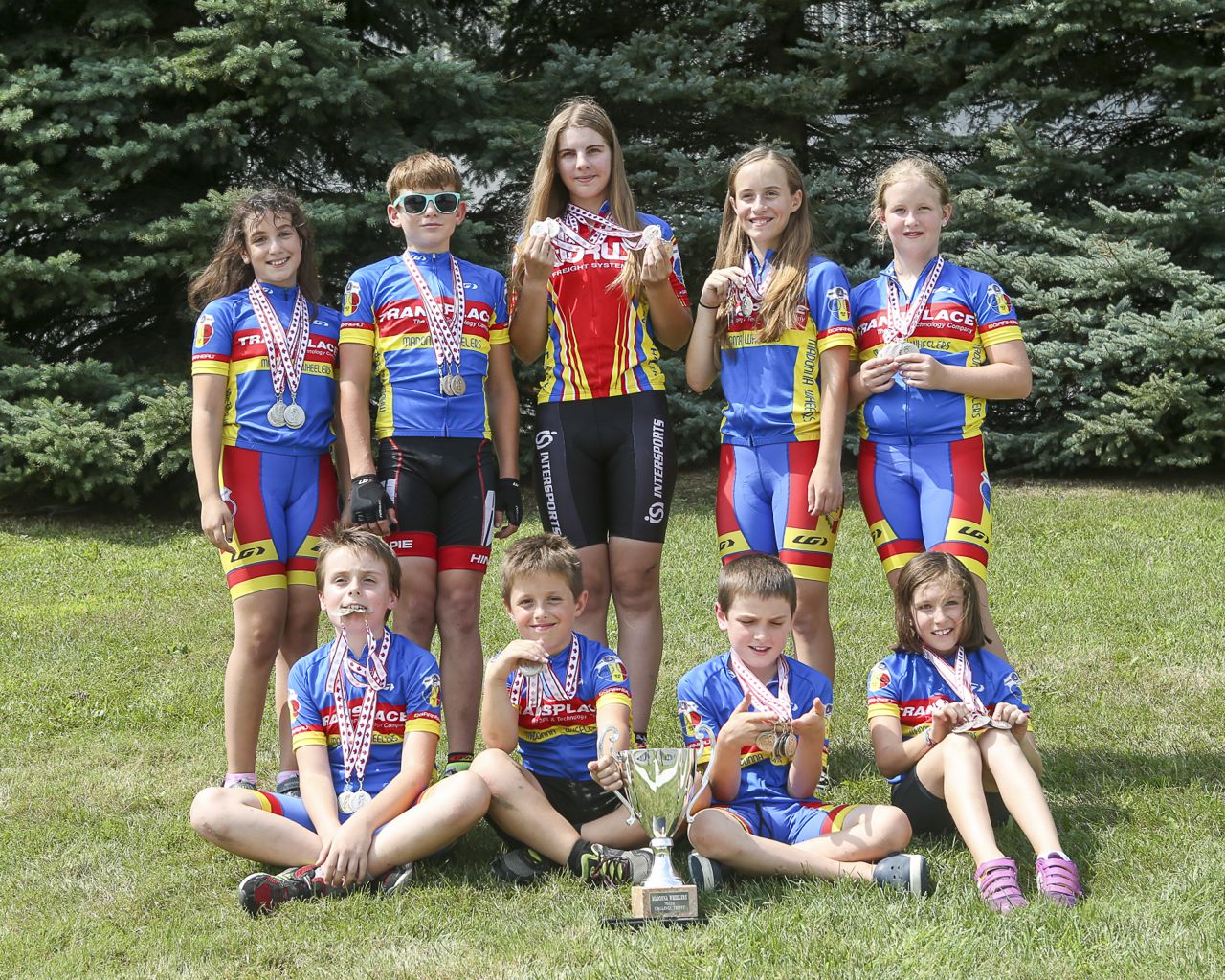 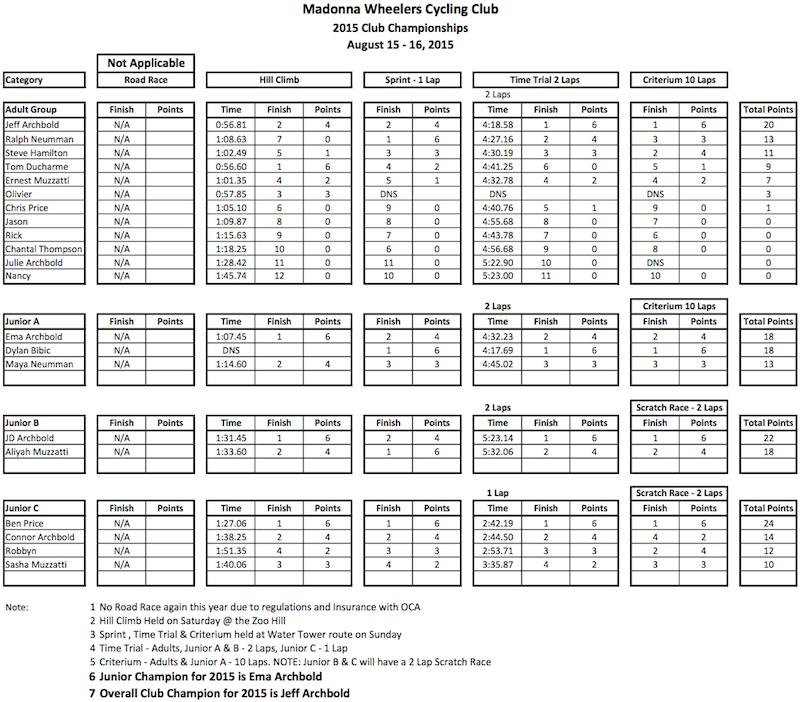 Congratulations to the Champions of the 2014 Madonna Wheelers Cycling Club Championships:

We had two of the greatest days weather wise, we have ever had for our club championships.

Competition was tight and fair and a good time was had by all.

The 2014 Club Champion was Jeff beating Roger by 1 point over 4 events.

Highlight of the 2 days was Ema and Maya finishing ahead of everyone in the Criterium except Jeff and Roger. 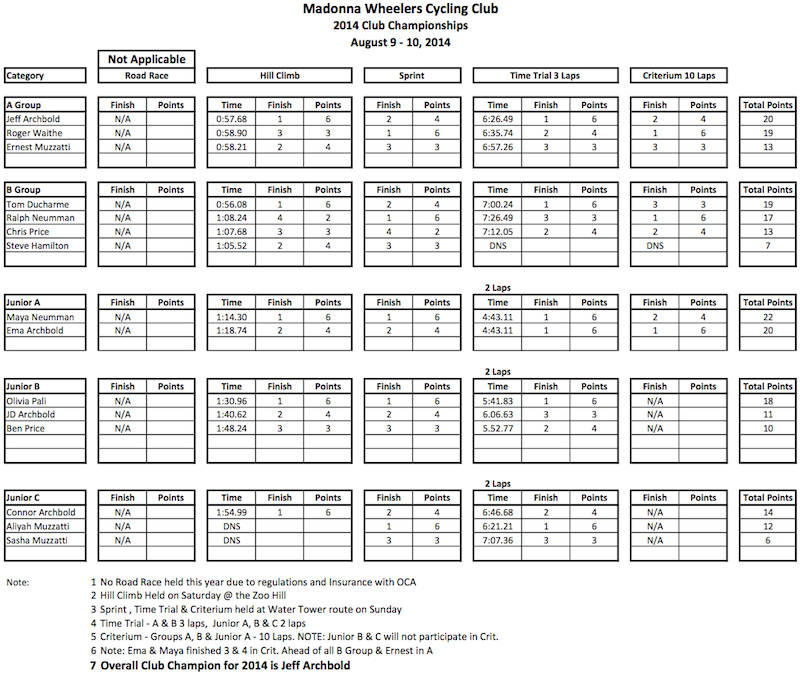 Congratulations to the Champions of the 2013 Madonna Wheelers Cycling Club Championships: Not all the results are posted yet but congratulations to Roger Waithe on his first big race since returning to competitive cycling 6 weeks ago. Roger finished 13th out of 30 in the Senior 4 and Master 3 group which includes much younger riders, he was also 3rd in his age group RMMC3.

On that note you should go to see a current movie called “Premium Express” which is about bike couriers in big cities like New York, this was Roger’s life for a few years in Toronto, after giving up bike racing.

I have lost track, however I believe this is the 5th annual D’Ornellas criterium we have been invited to and raced, the first 3 were in pouring rain, last year was almost dry and this year for the first time was bone dry.

Being that we are invited it is not nice to overwhelm our hosts with too much success and as is traditional we shared our podiums. In the 5 to 8 age group Conner (Jeff’s son and future member) was an easy winner, in the 9 to 17 age group Ema (Jeff’s daughter 10) was an embarrassing winner, despite being asked to slow down several times, won by at least half a lap and lapped a couple of participants in a 3 lap race.

The men did not fare as well, James was outmaneuvered by the other 4 D’Ornellas riders in the breakaway and sprinting is not his forte. Believe it or not Bruce Camacho was one of the 4 and finished 2nd amazing for a 64 year old that was unconscious as a result of the crash at the end of the Terracotta race.

Our sprinters all sat in the main peloton waiting for the break to come back but it was not to be. It did not make sense chasing down James and Chantal not knowing exactly what was happening up front. In the end due to some lap scoring mix up and strange bell ringing we ended up with 2 sprints, Roger Waithe took the first one and I took the second from Dan and I believe the D’Ornellas sprinter who won the first 3 races we competed in.

All in all a great day of fun racing, not sure how many knew or took advantage of it but a full breakfast with eggs, bacon, sausages, ham, baked goods, juice and coffee was provided and available to all who attended. This is still the best and probably safest criterium course in Ontario and it is nice that we can continue to share in its use courtesy of the town of Markham and D’Ornellas cycling club.

Photos from the Criterium have been posted to the gallery HERE. Final results have finally been posted on the sports stats WEBSITE.

Terracotta today was a little overwhelming for all including the officials who seemed to have trouble keeping track of the results.

The Intermediate road race however was not fun with 177 starters, despite doing a great job staying with the lead group for 52km Dan and James went down 100 metres from the finish in a crash that sent Bruce Camacho and Pierre Perrin to the hospital. Somehow, due to no major injuries and chip technology Dan still managed 34th and James 40th overall after picking themselves up and finishing. Somehow Pierre also got up and finished 60th with a broken collar bone and Bruce 149th on a stretcher in an ambulance. Tough day for the racers. Congratulations to all for a valiant effort under tough conditions.

Photos have been posted to the gallery HERE.

Thanks to Lorne, Gabe, Jeff, Dennis, Wayne, Bobby, Colline, Peter and Jane for showing up to support the team.